The initial seed for Resilient and Resiting was called ‘Sick Fucks’:

The idea was to produce a series of stories from people at the intersection of several kinds of marginalization: Those of us who are disabled, queer, kinky, sex workers, survivors. People who the system says are ‘sick’, ‘fucked up’, ‘damaged’, yet many of us are resisting, resilient, much political action (of all kinds) comes from the power of survival.

The project stemmed from my personal experience of several brutal years of austerity. Ill and exhausted, I began to think of how to speak about this, as an act of survival and resistance. To look at the criminalisation of the poor, the disappearance of services and legal protections, the rise in hate. How power functions through stigma. To go against the idea I had failed, if I wasn’t able to function well in a system that was actively working against me.

I made exploratory interviews and wrote collaborative stories with the people I interviewed.  Producing a zine from those stories, I started to talk to others about the stories and further ideas for breaking the isolation many of us were experiencing. Making contact with potential collaborators and sounding out community connections, I was also thinking about how to find some money to give this potential some resources.

In a long and very slow process, from writing those first stories, being turned down for things. Reading as part of ‘Raising Our Voices’, which lead to forming a supportive relationship with The Arcola Theatre. The project evolved, renamed ‘Resilient and Resisting’ and brought under the wing of the Arcola, it was eventually granted Heritage Lottery Funding. 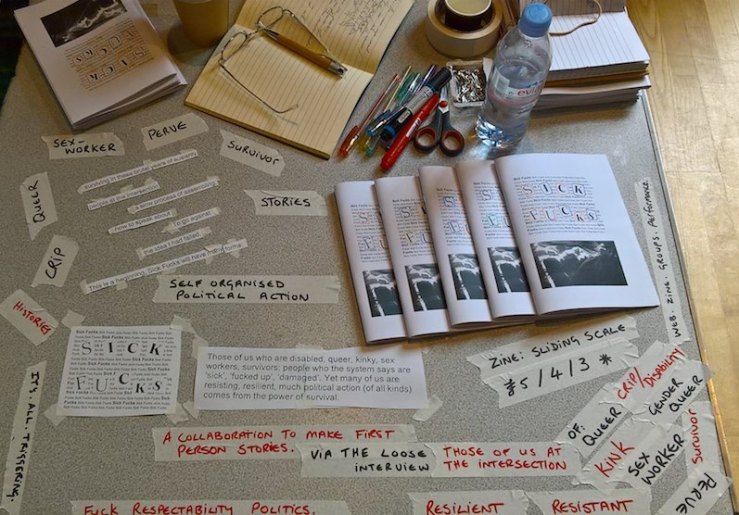 Shape Arts ‘Free Reads’ scheme for writers with disabilities/on low incomes and the accompanying workshops helped to encourage me to keep going!

Over the year the project was funded I produced 13 events: readings, archive visits, workshops and performances. 16 oral histories/collaborative stories were collected. We also were part of 7 radio shows. Contributions were made as submissions and group interviews were made. Five zine publications were produced to go with events and mp3 recordings of readings and transcripts of inteviews were made. Phew! It was a big and exhausting year!! Which many people contributed to and played a part in. Thank you!!

Resilient and Resisiting is now taking a break while we hunt for further funding, maybe we will come and visit other cities. Don’t be shy to get in touch.